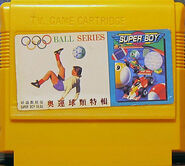 Cover variant of the updated version (Photo by MLJY).