The game is largely identical to the Japanese version of Super Mario Bros. 2. Aside from an edited title screen, some of the graphics were changed; the graphics were reused from Super Mario Bros. 3, although some sprites are custom. Some of the power-ups have a different use: a Super Mushroom turns Mario into Fire Mario, and a Starman allows Mario to swim in the air. 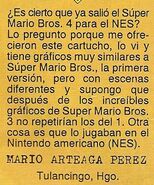