1990 Super Bros. 4 is a hack of the Japanese Super Mario Bros. 2 (aka Lost Levels outside of Japan).

Aside from an edited title screen, some of the graphics were changed; the graphics were reused from Super Mario Bros. 3, although some sprites are custom. Some of the power-ups have a different use: a Super Mushroom turns Mario into Fire Mario, and a Starman allows Mario to swim in the air. 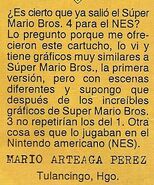 Letter from a reader asking if Super Mario Bros 4 came out, Club Nintendo México n°8, July 1992 (click image for English translation)
Add a photo to this gallery
Retrieved from "https://bootleggames.fandom.com/wiki/1990_Super_Bros._4?oldid=40533"
Community content is available under CC-BY-SA unless otherwise noted.