The 2004 New 8 in 1 is a multicart made for the Sega Mega Drive (Genesis) by an unknown company in 2004. As most other multicarts, the label pictures cover arts of the games, and the games have the copyright claims removed. The plastic shell is poorly made, and it's very difficult to keep it up together sometimes. A feature of this cartridge is that more than half the games (5/8) are developed by Sega itself.

The Revenge of Shinobi's title screen.

Robocop 3's title screen.
Add a photo to this gallery

The back of the cartridge. 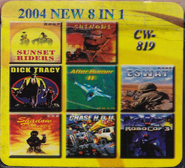 Complete scan of the label.
Add a photo to this gallery

Retrieved from "https://bootleggames.fandom.com/wiki/2004_New_8_in_1?oldid=37550"
Community content is available under CC-BY-SA unless otherwise noted.