24 in 1 is a Famicom multicart released possibly in 1999 which features 23 unique games.

It's notable for containing Waixing's Super Contra 8 alongside regular Famicom games (nearly all of them with copyrights removed).

The label has has holographic foil over it like most far eastern releases, and it features artwork from Super Mario 64, Galaxian (presumably from another pirate release), a photo of a Formula 1 racecar, a 3D rendering of a tank and artwork with the text "NEW Contra" (possibly from another unlicensed release as well).

All games have their copyrights removed unless noted.

The front of the cartridge.

The back of the cartridge.

The front of the PCB. Note the handwritten "24".

The mostly emply back of the PCB. 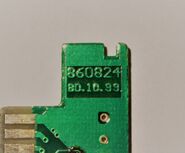 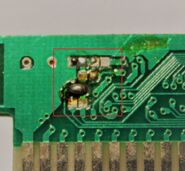 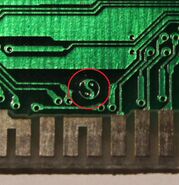 Symbol on the back of the PCB.

The first page of the menu screen. The cursor defaults to the game in the middle of the list.

The second page of the menu screen.

Title screen of M.U.S.C.L.E., with Wrestle replacing the original title.