Action 52 is an unlicensed NES multicart created by Active Enterprises Ltd in 1991. It is often cited as one of the worst games ever made.

As the name might suggest, this is a multicart containing 52 action-packed games. However, it has received much criticism for the poor quality of its games, with some common errors and glitches between the games being sprite flickering, poor controls, reusing game engines and the ending just being the player being sent back to level 1. Notably, it also contains 17 space shooters, which is almost a third of the cartridge. The intro uses a PCM sample of Rob Base & DJ E-Z Rock's "It Takes Two". One game, Fire Breathers, can only be played with two players and two other games. Alfredo and Jigsaw won't work on the majority of the cartridges that were released. Numerous games crash or become unplayable when reaching a certain part of the game; an example of this being Atmos Quake, which, due to a bug glitches up the start of level 5 which makes that level impossible to complete. Many have also criticised the retail price of the cartridge, having originally sold for $199. All of the games are two-player compatible, with all but Fire Breathers using an alternating player system like in Super Mario Bros. The menu code was stolen directly from Supervision 52-in-1, another (pirated) 52-in-1 multicart likely made in 1989. (Two of the games listed are called Galaxian 1989 and Exerion 1989) This appears to be especially likely due to a prototype version of Action 52, where the menu (apart from the game names) is identical to that of the 52-in-1 and the menu itself uses graphics from The Goonies, one of the games included on it.[1] As well as this, Fuzz Power seems to have taken some inspiration (the graphics in particular) from Adventure Island, which was included on the 52-in-1. Another hint may be that, when the player quits a game and returns to the menu screen, on both multicarts the selection always defaults to game 5.

There was also a competition to win $104,000 by completing level 5 of Ooze. However, this was later found to be impossible as the carts that had been released at the time crashed after level 2 of that game. The game also actually has 6 levels as opposed to 5, with the ending giving the player a code to send to Active. Incidentally, it's also the only game on the cartridge to have an ending, and one of only two to have a proper title screen, the other being Storm Over the Desert.

Notably, one of the members of Active Enterprises, Vince Perri, was inspired to make Action 52 after seeing his son play a pirated 40-in-1 multicart, with the intention of Action 52 being a legal version of it.[2] 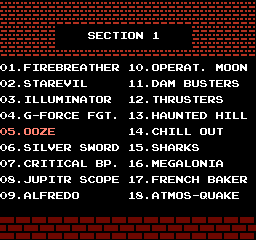 Action Gamer was the original 52nd game on the cartridge and is vastly different from Cheetahmen, with the intro not having been included, the music being different and the gameplay being different, although the game still has the Cheetahmen in it.[4] There are at least two levels in this game.

All the information in this section is taken from the Cutting Room Floor's article on Action 52 for the NES.

In Cheetahmen, each character has its own cutscene before playing as them. However, the cutscene for Apollo appears to have no text accompanied with the obligatory image. However, this is because Active forgot to put the alphabet characters next to the image tiles in the ROM. The hidden text, which reads as follows, can be found in a memory viewer during the cutscene and levels 5 and 6 of Cheetahmen

"APOLLO IS THE MASTER OF THE CROSSBOW. USE THE CROSSBOW TO DEFEAT THE ENEMIES ON THE LAST TWO LEVELS AND GET DR. MORBIS"

"CONGRATULATIONS! YOU MAY HAVE JUST WON... TAKE A PHOTOGRAPH OF THIS SCREEN AND SEND TO THE ADDRESS LISTED IN THE RULES AND REGULATIONS. YOUR PERSONAL CODE: 7A3H9J0P2R4A2C7S"

Despite the low quality of Action 52 in other aspects, its music has gained some fans. However some of the tracks in the games have been found to be example tracks taken from Activision's The Music Studio.[1]

Retrieved from "https://bootleggames.fandom.com/wiki/Action_52_(NES)?oldid=20812"
Community content is available under CC-BY-SA unless otherwise noted.