This article is about Aladdin (Super Game). For games with a similar title, see Aladdin (disambiguation).

Aladdin is a Famicom port of the Sega Mega Drive game of the same name, made by Super Game and published by Realtec.

This is one of three ports of Virgin's Aladdin games to the NES, alongside Aladdin II and the official European NES port. (Hummer Team's Aladdin is a port of Capcom's SNES game, which is related only in name to Virgin's)

The gameplay mechanics and controls of this port are generally considered to be the best of all three; jumping can be somewhat sluggish but nevertheless it is considerably more responsive than both the official port and Aladdin II, although there are collision detection issues in places.

The graphics and music are taken from the Mega Drive game and simplified, unlike the official port which instead uses graphics from the Game Boy version with a limited range of palettes applied, and features a more limited range of music.

Unlike Aladdin II, an intro and some between-level cutscenes are included in this version, and unlike many later Super Game games, it has an ending: a "The End" screen with the Genie popping out of a page, saying his famous quote: "Made you look!". 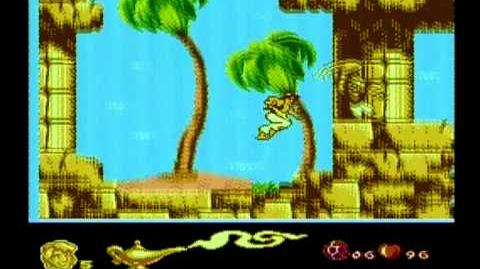 A cartridge of Aladdin that was found in Hungary.