This article is about Aladdin II (Mega Drive). For games with a similar title, see Aladdin (disambiguation).

Aladdin II is an unlicensed Mega Drive port of the SNES version of Disney's Aladdin, originally made by Capcom in 1994. It might have been developed by ex-workers from Chuanpu Technology and was likely published by X Boy. This port can be considered the "opposite" of Aladdin 2000, a port of Virgin's Aladdin to the SNES.

The game is just a port of the SNES version, it features all the stages from the original game, although with different color palettes. The game only has some predefined enemies and they have the same color palette in every stage.

Unlike the legit SNES version, the Mega Drive port lacks the bonus mini-games that appear once you complete each stage. The game still shows a Continue screen once the player loses all their lives, which has been very well recreated, but lacks Aladdin's monkey Abu (who doesn't appear outside of cutscenes)

Similarities to other EX-Chaunpu platformers

Similar to what happens in other games supposedly developed by ex-Chuanpu developers, like Pocket Monster and its sequel, the game has some noticeable features and glitches.

A preview of the Crash Handler screen. 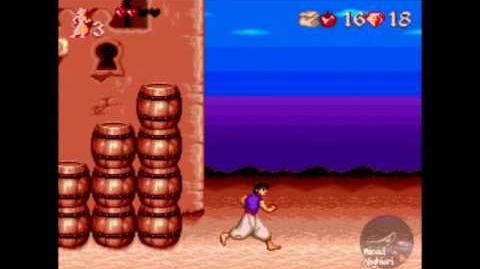 Pirate Showcase -52- Aladdin II
Gameplay with text commentary. Some glitches and effects of the Crash Handler screen are shown as well.
Community content is available under CC-BY-SA unless otherwise noted.
Advertisement