Ben 10 is an unlicensed Russian Sega Mega Drive port of a beat-em-up for Java phones Ben 10: The Power Of Omnitrix, based on the TV series of the same name. No developer credits exist in the game, but several elements point it to having been made by BMB.

Ben 10 starts on a basic title screen identical to most BMB games, where you have the options of beginning the game or setting up your preferred options. You use the A or C button to attack and the B button to jump, in a similar situation with Mario 4: Space Odyssey you have no control of your movement while you are in the air. The enemies have very basic AI, and there can only be two of them at a time. The music is ripped from TFM music maker (which is randomly selected every time you play a level), along with the sound driver and sound effects of Uwol: Quest for Money, supporting the theory that this game was developed by BMB. The continue screen is quite gruesome but the game over screen is just grim, unlike the rather infamous one from Felix the Cat. Overall this game is very similar to TMNT - The Legend Returns, with the same controls, playlist, and engine.

Gameplay from the first level.

The game's box and cartridge. 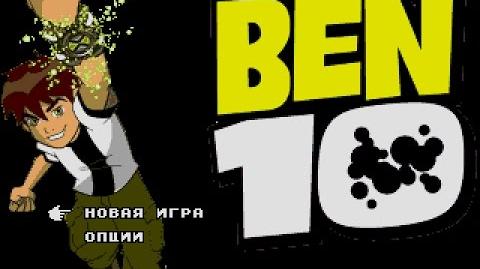