Boogerman II: The Final Adventure is an unlicensed port of the Mega Drive version of Boogerman: A Pick and Flick Adventure, made by Rex Soft in 1997. 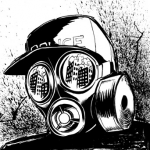