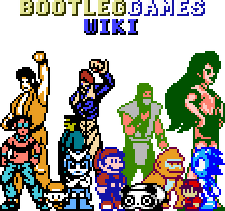 Unlicensed games are games released for mainly 8-bit and 16-bit consoles which aren't licensed or endorsed by the console maker. These games were generally produced in breach of someone else's copyright; usually either an unauthorized port of a game from one console to another (such as Super Mario World to the Famicom or Tekken to the Mega Drive), an original game using other companies' characters or copyrighted material (such as Harry's Legend or Kart Fighter) or a ROM hack of an existing game.

For example, Menace Beach and Pyramid are unlicensed games because they were produced for the NES without a license from Nintendo, but they're not bootleg because they do not include any stolen content, whereas Somari is a bootleg game as it is an unauthorized port of Sega's Sonic containing Nintendo's Mario character without the permission of either company, even though it was programmed from scratch. Super Mario 4 is a bootleg hack, as it's a modified version of Crayon Shin Chan 4 not authorized by either Nintendo or the developers/publishers of that game. Not all hacks are bootleg however; the Western release of Super Mario Bros. 2, despite technically being a hack of Doki Doki Panic, isn't because it was made by Nintendo and legally licensed.

Before you begin contributing, visit the help page!