BootlegGames Wiki
Register
Don't have an account?
Sign In
Advertisement
in: Companies, Companies from Brazil, Companies Still in Business,
and 5 more

CCE (portuguese abbreviation of Comércio de Componentes Eletrônicos, translated as Electronic Components Trading), is a Brazilian company that manufactures electronic products such as cellphones, computers, televisions and others. The company is still in business as of this day.

CCE was founded in 1964 by Isaac Sverner. In the beginning, the company only acted as an importer. In the 1970s, the company started to manufacture electronic products, and in the 1980s they expanded the business, manufacturing videocassette recorders and TVs.

CCE no longer works in the game industry, but they continue to make electronics.

CCE was purchased by Lenovo in 2012, but in 2015, Lenovo returned the company to the family that owned CCE before.

In the 1980s, the company started to produce Atari 2600 unlicensed cartridges of official games, and in 1989, they released the Top Game (aka Turbo Game), a Famiclone with inverted Mega Drive controllers and support for both 72 and 60 pin cartridges. At the same time, they started to distribute NES and Famicom cartridges with their own covers and plastic shells. 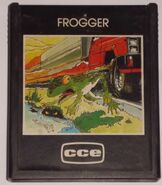 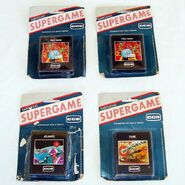 Some packed copies of Atari 2600 games.

Some 60 pin cartridges.
Community content is available under CC-BY-SA unless otherwise noted.
Advertisement