BootlegGames Wiki
Register
Don't have an account?
Sign In
Advertisement
in: Articles in need of images, Games, Game Boy Color games,
and 9 more

This is a port of Capcom vs SNK, with many of the characters from the original appearing in the game, although some that were not in the game are included, such as Yashiro and Blue Mary. The sprites are mostly take from the Game Boy version of Street Fighter II while other sprites are taken from Nettou Garou Densetsu Special, Nettou The King of Fighters '95 and 96 as well as Sachen's Street Fighter Zero 4. Of the twenty-eight characters playable, at least four of them are palette swaps. Similar to the aforementioned Street Fighter Zero 4, there are also two hidden characters for each side which cannot be accessed.

Back of box, with pictures of the Neo Geo Pocket Color game SNK vs Capcom: The Match of the Millennium. The artwork of Kula Diamond and King - neither of which are featured in the game - is from The King of Fighters 2000.

Back of the manual. 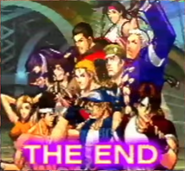