Contra Spirits, also known as Super Contra 3, is a pirated Famicom port of Contra III: The Alien Wars (Contra Spirits in Japan and Super Probotector: Alien Rebels in Europe) for the SNES, made by Ei-How Yang (and possibly others) in 1995. It was only released in 1997.

The powerups are limited when compared with the original games, with the only collectable weapons being the laser and spread guns, and these function slightly differently. The spread gun only fires in 3 directions as opposed to 5 and the laser only does 2 regular shots of damage. The smart bombs are also kept in this version and function similarly to those from the SNES game.

The player can start with anywhere between 3 and 9 lives (between 3 and 30 in the rerelease) through the use of the options screen, although there are no continues in this game. (there also appears to be no way to gain extra lives here either) There is also a sound test there, although the difficulty option was removed.

The controls are similar, although the player can change direction while crouched. Due to the limited number of buttons, the player now only has one gun as opposed to two. The controls are actually very similar to the original Contra.

The audiovisuals were remade from the original game and simplified, and they were used on the appropriate levels. There is some sprite flicker in this game though, including the ending.

Like in the original game, this pirate is split up into six areas. The first is similar to that of the original's, although the tank mini-boss was omitted in this version. The second level is actually the third from the original game, and is mostly accurate aside from the start where the rolling enemies can't be killed.

The fifth level is almost identical to the second level (in this version) except the sky is pink as opposed to blue. The rolling enemies use different sprites here for unknown reasons. The final level is in a similar form as it was in the original, although some parts were cut out such as the starting area.

The intro clip of this game has English text available neither in the original Contra III: The Alien Wars nor in the Japanese original: WELCOME / THE WORLD OF GAME / A GAME / END. There is also at least one Japanese mistake in the intro as well.

The ending to this game is your player holding on to a helicopter with the word "THEND" written at the bottom of the screen.

PCB found in the Realtec print. One can read "HSK001-A" on the side which strongly suggests Hosenkan is involved. 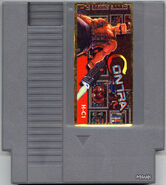