Crash II Advance is an unlicensed sidescrolling platformer for the Game Boy Color made by Sintax in 2003.

While the game takes some elements from Crash Bandicoot: The Huge Adventure for the Game Boy Advance, it is more of an original game than a port. Crash can only take one hit before dying, and there are no Aku Aku masks or similar items to give Crash more health. A jumps and B makes Crash spin or use a weapon. Holding down Left or Right while pressing B enables Crash to spin even while holding a weapon. Down makes Crash duck; pressing A while ducking makes Crash do a long jump.

There are six stages, with a boss battle after the third and sixth. The goal of every stage is to find a blue gem and head for the exit portal. Stage 2, where Crash is being chased by a truck, is the exception. The two boss stages differ from the regular game in that Crash can take up to three hits before dying (the first and second hits turn him green and red respectively). There is no indication of how much health a boss has, and defeating one simply cuts to a black screen. After a level is completed, the player is given the option to save to one of two slots.

The level design sometimes requires the player to make leaps of faith, avoiding bottomless pits and enemies. This is not helped by the small screen size and poor collision detection. For example, Crash will bounce off the side of a crate even if he lands in the center.

The game pilfers assets from various titles. The music and sound effects are taken from Kandume Monsters for the Game Boy. The load/save screen background is taken from Crash Bandicoot: The Huge Adventure. The first boss, a mermaid, is taken from Don Doko Don 2 for the Famicom. Some sprites are taken from Felix The Cat for the NES, like the tree enemy and Felix himself. 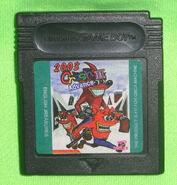