Dao Shuai (盜帥) is an action game developed by Joy Van and released by Thin Chen Enterprise in 1989. It was later adapted for the western market as Master Chu & Drunkard Hu.

The story tells of Master Chu Liu-Hsiang and Master Hu's efforts to stop Shiva's reign of terror to their land.  Past attempts to stop Shiva and their demons has lead to Hu becoming a drunkard in despair, but is still a capable fighter and ally to Master Chu.

The game is a horizontal platformer of sorts; the goal isn't to reach one end of the level to the other, but rather to uncover and collect eight yin-yangs (called Symbols of Harmony in the manual) in order to automatically proceed to the boss of the stage.  The symbols and other power-ups (such as health pickups and spread shots) are either in plain sight or hidden inside various spots of the stage such as torches, vases, even random spots on walls and must be uncovered with your projectile attack.  Along with said attack the player also has a fan (or a knife if they're Hu) which can deflect head-on projectiles, however the hitbox for said ability and what projectiles you can deflect are very picky and unreliable.

The game is ten levels long, and the bosses play out mostly the same save for the final fight with Shiva. 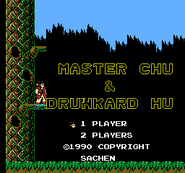 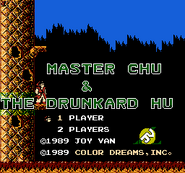 Top label of the Famicom release.

Front of the Famicom PCB.

Back of the Famicom PCB.

Back of the NES Sachen release's box.

Advertisement on another Joy Van cartridge.