Death Caliber is a shooter for the Sega Mega Drive, released by Hummer Software (ex-Dragon Co. members) on May 18, 2002 and published by Glorysun. It is completely in Russian, although a very rare English version is known to exist. The story appears to be that the player is an agent stopping Al-Qaida agents after 9/11.

Story from the intro of the English version, with all English left intact:

"2001.9.11 there are four events of terrorist skyjacking. The hijacked four airliners bombed in the tower of World Trade Center and Department of Defense Pentagon building. At the same time, another airbus was pranged. The two buildings of World Trade Center was crumbled to dust in less one hour. Thousands of people deceased in smother.

The thing is really earthshaking terror assault. That makes America and alliance fall into panic and indignation. The America President Bush, Prime Minister Blair of U.K and France President Chirac, Russia President Putin, Arafat rebuke the outrages separately. According to the investigation, Bin Laden is the chief instigator of this accident, who is the father of the terrorists. It is also known that there will be a large scale terrorism. You, as an excellent anti-terrorism expert, will depend on your own wisdom to prevent the ongoing outrage and salvage your country, save the whole human world and culture." 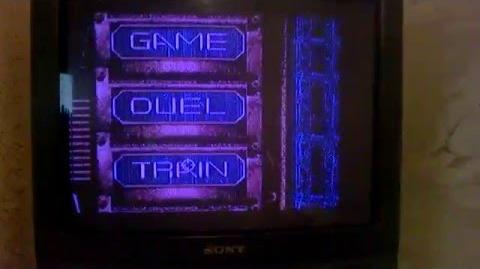