Devil Island is an action game for the Game Boy Color. It is alternately known as Devil Land, 惡魔城2 月風魔篇 (Castlevania 2: Record of Getsu Fūma(?)), 魔戒博詵 (Lord of the Rings), and 魔戒3-不完美的世界 (Lord of the Rings 3: Imperfect World). The text is completely in Chinese, and no English translation is known to exist.

Devil Island copies Konami's Japan-exclusive NES game, Getsu Fūma Den, with its gameplay. The game's aesthetics are styled after the Castlevania franchise, also by Konami. Much like Castlevania, the player's default weapon is a whip, except it can be held down for rapid fire. Items can be bought and used in-game by pausing and selecting with the A and B buttons, which are needed to progress in some places. The player must also find and defeat guardian bosses in order to proceed. The game offers unlimited continues.

Devil Island shows a few signs of being developed by Vast Fame. The main evidence is the Mega Man V sound engine. In addition, this game has also appeared on several Vast Fame-licensed multicarts alongside confirmed Vast Fame games such as Shi Kong Xing Shou.

The opening cutscenes are clearly stolen from various SNES games.

Two different carts of the game; both have a "TD-SOFT" boot logo and different title screens. 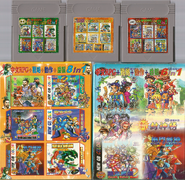 All currently known Vast Fame multis; they feature this game but rarely explicitly say so.