The players explore underground to catch diamonds, fruits, and jewels, which all give points. It's possible to get stuck in a lot of boulders, so a bomb function is available for everyone. But beware of getting caught in a bomb explosion or getting hit on the head by a boulder, as this will cost you. 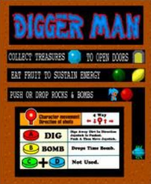 The marquee for Digger Man.
Community content is available under CC-BY-SA unless otherwise noted.
Advertisement