Digimon Ruby, also known as Digimon Rury, is a bootleg RPG for the Game Boy Advance based on the second Digimon anime. It was first made in Chinese, and then haphazardly translated into English. Some of the game's graphics are stolen from the licensed Game Boy Advance game Dokapon: Monster Hunter.

The plot loosely follows the first arc of Digimon Adventure 02, with several changes. The names of the humans as well as the Digimon appear to be based on romanizations from the Chinese language. For example, Daisuke is called, Da Fu.

The sound engine is stolen from Smilesoft's Keitai Denjuu Telefang, rather than Capcom's Mega Man series. No specific company is credited in-game or on the boxart, but this RPG shows a few signs of being developed by Vast Fame.

Title screen of original Chinese version.
Add a photo to this gallery 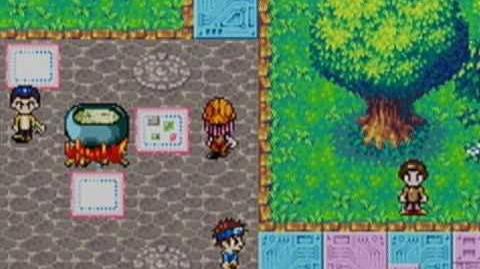 Digimon Ruby (GBA)
Add a photo to this gallery
Retrieved from "https://bootleggames.fandom.com/wiki/Digimon_Ruby?oldid=31475"
Community content is available under CC-BY-SA unless otherwise noted.