Digital Dragon (also known as 数码暴龙4水晶版 or Digimon 4 Crystal Version on the title screen) is a pirate port of Vast Fame's Digital Monsters 3 game to the Famicom developed by Waixing.

Like the Game Boy Color game, it's a port of the game is based off the Digimon Adventure anime. The player can select from one of the eight Digidestined (which determines the player's sprite and starter Digimon). However, not every starter mon is paired with their corresponding kid. The game plays mostly the same but much cruder, as player portraits are sized-up tracings of the original portrait graphics and damage calculation is buggy and somewhat random. On top of this the wild Digimon that show up in each area is not properly accurate, as Betamon is one of the enemies you encounter in the first dungeon when normally you only encounter baby Digimon.

The music uses new compositions made by Waixing themselves rather than attempting to port over either of the original's soundtracks. 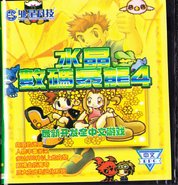 A later print box for the game, labeled as Digimon 4 Crystal Version.
Add a photo to this gallery

Retrieved from "https://bootleggames.fandom.com/wiki/Digital_Dragon?oldid=43264"
Community content is available under CC-BY-SA unless otherwise noted.