The game, while featuring characters from the Digimon Adventures anime, seems to have its own plot. The player can choose from the eight main characters to play as, though all it changes is the starter Digimon and player graphics.

It plays similar to a Pokemon game, but instead of using items to capture an enemy during battle the player must give the wild Digimon enough of an item they enjoy (categorized between vaccine, virus and data) and defeat them. The Digimon evolve by leveling up to a certain point and then do so manually at their base, which the player can choose depending on what base guard they talked to first. The Digimon the player obtains from the base leader depends on which one they chose. 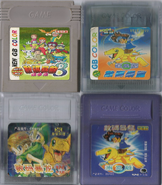 New Game release as Digimon Ruby.
Add a photo to this gallery

Retrieved from "https://bootleggames.fandom.com/wiki/Digital_Monsters_3?oldid=33288"
Community content is available under CC-BY-SA unless otherwise noted.