Domkey Kong, also known as Donkey Kong on J.Y. multicarts with the typo removed, is a unlicensed hack of Tiny Toon Adventures by Konami.

The game starts with a title screen with a red Donkey Kong alongside an unnamed pink Kong (named "Babs Kong" in the intro). The rest of the game contains such as carrots replaced with bananas. 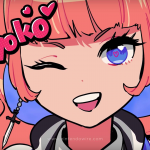