Donkey Kong 5: The Journey of Over Time and Space

(note that the story has many grammatical errors)

"The pretty and virtuous girl Sodoma was Donkey Kong's friend, she was the spirit what charge of all the plant in the world, she distributed sunlight air and water to each plant everyday, so that they could grow up healthy and strongly......

The flower bloomed no longer, and the tree blasted slowly......the banana and the wild fruit the Donkey Kong loved had been lacked too. The world became desolate at once......

There were no any thing to eat, Donkey Kong felt very hungry, and the famine made him thinner and thinner, finally he became a monkey.

The poor Donkey Kong can but left the forest, begun his difficult joumey to search for food and save Sodoma......"

"Donkey Kong came through all kinds of difficulties, conquered Lonbadoand saved Sodoma finally, so, the world resumed livingness from then on......"

The game itself is a remake of the first five worlds of Super Mario Bros., with Donkey Kong as the main protagonist (although you control Diddy Kong when you have no powerups). All graphics have been replaced with sprites from various other Game Boy titles (the DK ones are from Donkey Kong Land), and the music and sound effects are lifted from Pokémon Pinball. Brick Blocks can no longer be broken, even as big Donkey Kong - this leads to several instances where the player has to intentionally become small to fit through gaps. Like many pirates, the controls are poor and delayed, leading to frustrating gameplay - luckily, however, there are seemingly infinite continues.

The music was stolen from Pokémon Pinball from Game Boy Color.

As with many Sintax games, several variants of Donkey Kong 5 were released, changing graphics and other elements. They include:

A hack that replaces Diddy Kong with Bub from Bubble Bobble and Donkey Kong with Agumon from Digimon. It also removes access to the Warp Zone on World 1-2. Graphics are used from Bust-a-Move 2 (GB) Classic Bubble Bobble (GBC), and Croc 2 (GBC) (on the title screen); the other graphics are seemingly original. Known as 2003 Digimom Sapphi on the cartridge label.

Harry Boy and the Chamber of Secrets

Donkey Kong is turned into Harry Potter, and his small form is now a frog. Known as The Second Edition Harry Boy - The Secret of the Chamber of Secrets on the cartridge label.

A basic title screen hack. Aside from being a Mario clone in itself, the game has nothing to do with Super Mario Sunshine.

The example of Spinning animation for the bootleg (Donkey Kong 5) and original (Taz-Mania). 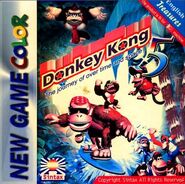 Later release featuring artwork from Donkey Kong Country Returns, dating it to 2010 or after.