The gameplay, graphics, and sound are similar to the official Game Boy Color port of Donkey Kong Country, albeit downgraded to work on the Famicom. It's often considered to be significantly superior to other pirates based on the Donkey Kong Country series.

The player controls Donkey Kong and Diddy through numerous side-scrolling levels of many different themes. The two Kongs can be swapped by pressing Select, provided both are available.

The sprites are smaller than the original, likely because of the Famicom's sprite limit. Nevertheless, there is still the occasional sprite flickering in-game. The animal buddies are completely missing, not unlike many other Donkey Kong Country pirates.

The save feature was removed, and replaced with a password system similar to Aladdin. The passwords are displayed whenever the player gets a game over as opposed to beating a level like in Aladdin. However, because the player starts with 25 lives, it takes a while (and possibly many intentional deaths) to reach this screen.

The ending was replaced with a simple credit sequence as well as a "The End" message.

Common with other games released by J.Y., several variations are contained within the same ROM. This allows them to sell multiple different versions simply by soldering points on the PCB:

Despite being a port of Donkey Kong Country, this game also has a few similarities to Donkey Kong Land: 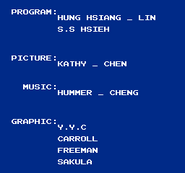 Credits.
Add a photo to this gallery
Retrieved from "https://bootleggames.fandom.com/wiki/Donkey_Kong_Country_4?oldid=42472"
Community content is available under CC-BY-SA unless otherwise noted.