Start a Wiki
Nature Clan: Escapeway, or simply known as Escapeway, is a game in the Nature Clan series, developed by Nice Code.

Three Nature Clans are on top of each other, and their goal is to jump over objects, such as bombs, in every level.

Qi Sheng Long made a hack of this game, titled Rushing Brothers. The title screen was changed, and the Nature Clans' sprites were changed into different characters. 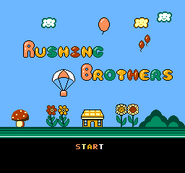 Rushing Brothers
Add a photo to this gallery
Retrieved from "https://bootleggames.fandom.com/wiki/Escapeway?oldid=37807"
Community content is available under CC-BY-SA unless otherwise noted.