When you start the game, you must first select a few eggs. Players must then take care of the eggs while it hatches. During this time, you have the option of flipping the egg upside-down, or changing the temperature. On the upper-left corner of the screen, there's a box that shows the current weather. If the temparature is at a certain point during the time of a different weather, the player loses and must start from scratch. When the eggs do hatch, players have the option of giving the chicken's name.

A new set of commands appears upon the chicken's hatch. Options include giving the hen food and clothes or taking it for an outing.(The latter is nothing more than a picture still.) There's also a option to save your game but for some strange reason, it does not function properly. It may be due to the fact that the game lacks a battery save.

A cartridge of the game that misspells it as "Fighty Chicken". 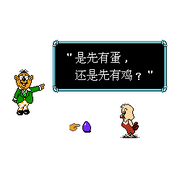 Ernest Penfold's cameo in the intro.