The Slot Machine (also referred by its danish name: Spillemaskine) is a Famiclone-based console in the form factor of a miniature arcade cabinet, sold in Flying Tiger stores around Europe. It retails for € 15.

Despite the name, its design is not based around gambling machines, but rather on arcade cabinets, as implied by both the general shape and the Pac-Man-esque marquees.

Like all Flying Tiger products, its name is actually a generic, self-descriptive name (written on the box in both Danish and English).

The Slot Machine features, as claimed on the box, 118 games stored internally. There are no additional cartridge inputs.

On startup, the game selection takes form of a 118-in-1 multicart-style menu: nearly all of them are Nice Code games, with a few of the remaining ones being either homebrew or official Famicom games (mostly from Jaleco and Konami) somewhat altered and/or with copyrights removed. 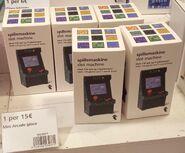 Boxes on display in an Italian Flying Tiger store

Screen photo (left) vs. Emulator capture (right).
Add a photo to this gallery

Retrieved from "https://bootleggames.fandom.com/wiki/Flying_Tiger_Slot_Machine?oldid=45555"
Community content is available under CC-BY-SA unless otherwise noted.