Atop of this, Waixing also developed games built into various consoles since somewhere around 2005 - including those developed by Subor and Macro Winners - notably for various Wii clones such as the Zone 40 and MiWi. Some are Famicom-based (either standard Famiclone hardware, or VR Technology hardware with an enhanced colour palette) while others use certain 16-bit or 32-bit architectures. Some of these games were developed by Nice Code Software, Cube Technology, and possibly JungleTac, but feature Waixing copyrights on their title screens. In the case where additional changes were made to these games when released elsewhere, including those of the Nice Code library, they would usually have different title screens, graphics, or even an entirely new set of music.

Nowadays, Waixing has finished Famicom development (although their TMall site has their FC library available) and now manufactures Wii clones and educational software.

Waixing was formed on November 18, 1993 after the split of a joint venture with Micro Genius called Chengdu Tai Jing Da Dong Computer Co, which developed games such as Journey to the West and Aladdin II.[1] Future staff of Waixing would also join when Hengmao Electronics, UMC's mainland development team, was closed after the failure of the Super A'can.

According to its website, Waixing is now the "Z R & D center" of Zhong Shan Binary Star Educational Technology Holdings Co., Ltd. Waixing is also the parent company of - or at least in close cooperation with - Subor, a prolific manufacturer of keyboard-based and standard Famicom clones, including other varieties of consoles and electronics. This company is also based in Zhongshan.

A number of Famiclones and other plug & play console systems, especially those made by Subor, include games copyrighted to Waixing. Unlike Waixing's Famicom cartridge releases (which are mostly Chinese RPGs), these are usually action or puzzle games.

Many games copyrighted to Waixing that exist on OneBus based Famiclone (VT02 or VT03) consoles are developed by Nice Code Software and are listed on that company's page, but the following are exclusive to Waixing consoles and may have been developed by other companies. They also appear on Coolboy Famiclones. Most exist in both VT02 and VT03 versions but some were only produced for one or the other.

In addition, several VT03-exclusive hacks of official NES games were created for Waixing Famiclones, including:

These consoles often include updates of certain games previously released by both Waixing and Inventor, such as:

These games are usually severely cut-down; the original Inventor version of F-22 has 16 levels, whereas Waixing's Famiclone version only has 3.

These games are usually found built into Wii clones or generic handhelds. Some are updated versions of 8-bit games.

Waixing is known to have released 29 games according to this link: https://mobile.twitter.com/yySintax. 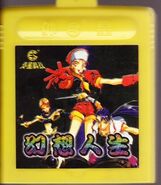 Retrieved from "https://bootleggames.fandom.com/wiki/Fuzhou_Waixing_Computer_Science_%26_Technology_Co.,LTD?oldid=44707"
Community content is available under CC-BY-SA unless otherwise noted.