The GB Station Light II is a handheld Famiclone, modeled after the Game Boy Advance SP.

It was manufactured by an unknown company and sold through GearBest and other e-Commerce sites like AliBaba/AliExpress, though one listing on Amazon IT seems to be present. Similar variants are currently sold on other websites.

The button layout is based off the GBA SP, with L and R acting as Turbo A and B respectively, and the backlight switch is now a Reset button.

The screen measures 4,5x3,1 cm (1.7x1.2 in). It has the wrong aspect ratio and no scaling, and as a result, many vertical lines are missing.

The AV out is NTSC only, and it deactivates the handheld screen automatically when the cable is connected on startup. Just like the original Famicom, the audio is mono only.

Some colors are displayed differently depending on the display (device or AV out): for example, the blue backgrounds in games such as Super Mario Bros. and Arabian appear bright pink on the display but on the AV out, they are light blue.

Everything else is repeated. 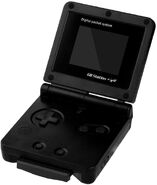 The console, open (Amazon IT)

The console, closed (Amazon IT) 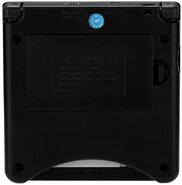 The bottom of the console (Amazon IT) 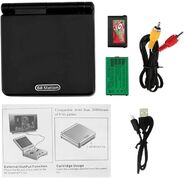 Contents of the box (Amazon IT)