The Game Genie was a line of cheat devices (marketed as a "video game enhancer") developed by Codemasters and published by Galoob. It was sold in the US, Canada and the UK.

The Game Genie was first invented in 1990 by game developer Codemasters, and sold by Camerica in Canada and Galoob in the United States. The cartridge sits between the game console and the game itself, temporarily modifying program data at runtime allowing the player to manipulate game behavior and sometimes access unused assets and functions.

As with most unlicensed games and peripherals, Nintendo took umbrage at the Game Genie's release, contending that the device produced derivative works and filed a lawsuit against Galoob for copyright infringement. Sales of the Game Genie initially stopped in the U.S., but not in Canada. In many gaming magazines of the time, Galoob placed Game Genie ads saying "Thank You Canada!".

The trial concluded in 1991, with District Judge Fern M. Smith ruling that the Game Genie was in no way violating Nintendo's copyrights, and viewed it as being no different from "skipping portions of a book" or fast-forwarding through a purchased movie, as no derivative content was made whatsoever. Nintendo appealed the verdict to the Ninth Circuit Court of Appeals, but lost as the Ninth Circuit affirmed the lower court's decision.

The Game Genie was a huge commercial success and was very popular in North America. It sold 5 million NES Game Genies which pushed both Galoob and Codemasters safely in the video game market. Game Genie was released for many other consoles including the Game Gear, Game Boy, SNES and the Sega Mega Drive/Genesis.

A 60-pin Famicom version of the Game Genie was released under license by Realtec and was sold in Poland, South America and Taiwan, and likely other countries where 60-pin Famicom clones were common. The box art was largely unmodified from the NES version and still depicted the 72-pin Game Genie.

Like any cheat cartridge, it would always have code problems. Overloading a certain game with codes may cause it to crash. The Game Genie instruction manual suggests that players should try another code. The most well-known problem with the NES Game Genie is that it gradually damages the NES, putting stress on the 72-pin connector until the NES is unplayable without the Game Genie attached to the game. This means that the 72-pin connector must be replaced if this happens.

At CES 2012, company Hyperkin announced a resurrection of the Game Genie brand. The consoles that it is released on are the 3DS, DSi, DS, Wii, PS3, and PSP. Also, a planned release for the new Game Genie is going to be on a new upcoming console called Save Guru. 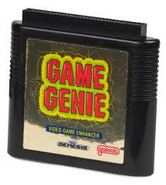 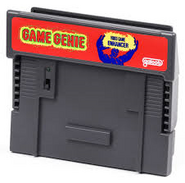 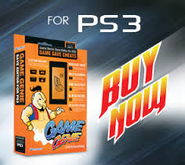