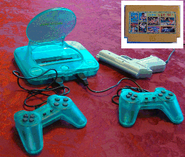 The Game Player and its controllers.