BootlegGames Wiki
Register
Don't have an account?
Sign In
Advertisement
in: Companies, Companies from Taipei, Taiwan, Developers,
and 3 more

Some of their mono games will only run on mono systems like the original Game Boy, due to the boot logo change. Others will not run on the Game Boy Advance line of systems, nor the Super Game Boy or Game Boy Player.

A list of games Gowin was selling in English during the early 2000s. 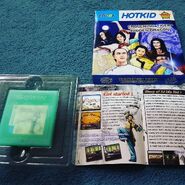 The Songtly Release of Top Secret