Start a Wiki
GunBee F-99 (also known as GunBee-F99: The Kidnapping of Lady Akiko in the intro) was an unlicensed port of Detana!! TwinBee for the Amiga, published by APC&TCP and developed by Twin Eagles Group. It was originally first an unofficial port of Detana!! TwinBee under the name of AmiBee, through later changed to a different storyline, but kept the gameplay.

There are two modes: Honey Mode, which served as a training mode, and Story Mode, which directed to the intro of the story. While the gameplay was based on TwinBee, the intro was similar to the one seen in Turrican 3: Payment Day. Kiara McGuire was a reference to Ben McGuire from the Turrican series.

"Somewhere in the universe, Valstyx is being involved in a chaos by strange beasts and weird machines. Leading the attack, Lord Khenmir wants to steal the five Crystals owned by the beautiful princess Akiko. Akiko is worried about the lord's plans as the crystals can supply enough power to conquer whole planets. But Lord Khenmir's patience is over. He order to his favorite pet, Kangry, to visit Akiko's royal city. Helped by his savage beasts, the Lord take possession of the crystals and kidnaps the princess Akiko. Sad for a lost of her best friend, Kiara McGuire will lead the assault to save Akiko and take back the crystals and fight against Khenmir's beasts. The engineers designed the ultimate instrument of destruction: GunBee-F99." 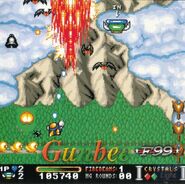 Back scan
Add a photo to this gallery
Retrieved from "https://bootleggames.fandom.com/wiki/Gunbee_F-99?oldid=37825"
Community content is available under CC-BY-SA unless otherwise noted.