Haitai Electronics (해태전자) was a South Korean general electronics manufacturer and distributor part of the Haitai conglomerate. In 1989, they entered the game market with their own brand named Haitai Supercom (해태 슈퍼콤). Their main activities consisted on distributing Whirlwind Manu catalog and Famiclones under their brand. They put an end to their gaming division after the failure of the PC-Engine in 1993, which they were in charge of distributing.

Haitai was apparently the official distributor of Whirlwind Manu catalog in Korea. They made their own cover for each releases often featuring Hangul and their logo. The games were sometimes retailed in plastic box with a generic cover and a sticker on the spine with the game title. They also manufactured their own cartridges cases at a point. In the end of 1990, some Japanese publishers alongside with Nintendo sued Haitai for selling their games illegally. Supercom went on to distribute titles licensed in South Korea by Daou Infosys from Tengen then Color Dreams. It seems by the middle of 1991 they had quite reduced their Famicom activities. Their last Famicom activities consisted of an ad on Magic Kid Googoo box and the release of their last clone, the Supercom X-1600 by a subcontractor named Kobo.

Daou licensed nine titles from unlicensed games developers from America and had Haitai to distribute at least six of them under the Supercom brand. The first titles released were Klax and Road Runner in the very first weeks of 1991. Skull and Crossbones and Toobin were manufactured in June 1991. The Color Dreams catalog and Shockwave seem to have been fully released by July 1991 too.

While Supercom may or may not have published it, their logo is definitely featured on front of the box. They may have simply paid Zemina to have it featured on the box.

Ad for the Supercom (rebanded Aaronix) with the Haitai Supercom mascot. (Photo courtesy of yeopjib-yeoja)

Another commercial, courtesy of laptick. 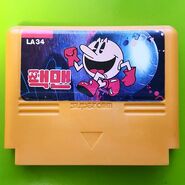 Various box spines. The color for the spine was different for each Whirlwind Manu line. Photo courtesy of KMHz.

Box front of some of their Whirlwind Manu cartridges.

Back. Photos courtesy of KMHz.

Some multicart. Photo courtesy of tarzan.

Generic box used later on. The name of the game was printed on a sticker that was placed on the box side.