Happy Angel Legend is a Teletubbies themed hack of Tiny Toon Adventures for the Famicom that replaces Buster Bunny with Po, Plucky Duck with Tinky Winky, Dizzy Devil with Dipsy, recolours Furrball yellow (supposed to be Laa Laa), Babs Bunny (only in the ending) with a pink Teletubby and recolours the enemies, the game blanks out Concord Condor but his sound can still be heard, albeit glitched. The level 1 music is changed into the Elmyra's Battle Music and level 1, which is a field in the original, was reworked into a city-like setting. Montana has no eyes in the ending. The game also blanks out Shirley and The forest level music can be heard instead of the map theme.

This game is very rare and was only ever found on a few plug and plays, such as the Arcade Action II 100 in 1. 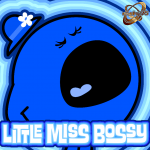