Hong Kong 97 is an unpublished video game made for the Super Famicom, developed by HappySoft in 1995. In Japan and Taiwan, this game has gained cult status and been labelled as a kuso-ge (which in the literal sense, means "shitty game" in Japanese), and some have labelled it as one of the worst games ever made.

The year 1997 has arrived. A herd of fuckin' ugly reds. are rushing from the mainland. Crime rate skyrockeded! Hongkong is ruined! Therefore, the Hongkong government called Bruce Lee's relative "Chin" for the massacre of the Reds. Chin is a killer machine. Wipe out all 1.2 billion of the red communists! However, in mainland China, there was a secret project in progress! A project to transform the deceased Tong Shau Ping into an ultimate weapon!

The game was designed by the Japanese journalist, Kowloon Kurosawa. Kowloon says the game was made in about a week and was supposed to mock Nintendo's strict quality standards for licensing a game. This game was never actually published in stores, with Kurosawa sending copies himself via mail.[1][2]

Numerous celebrities had their likenesses ripped and translated into a 16-bit format, almost certainly without their permission, including Jackie Chan from Wheels on Meals (Chin), Bruce Lee, Chris Patten, Deng Xiaoping and the Coca-Cola Company.

This game's story is heavily anti-communist. Despite the fact that it had almost no release and was unlicensed, the game has 3 languages (Japanese, Traditional Chinese and English). The language in the English version is comprised of vulgar Engrish. The only sound is the first three measures of the Communist song "I Love Beijing Tiananmen", which loops for the entire game. The loop lasts for only six seconds and doesn't stop even during the Game Over screen, or when the game is going back to the title screen afterwards.

There is an unsubstantiated rumor on the Internet that the image of Dead Chin is a photo of the corpse of Polish boxer Leszek Błażyński. There has been speculation that HappySoft was also involved in his death. This is not true, there is no evidence, and there would be no way to obtain these images unless you worked for Polish law enforcement or were actually present at the scene. It is well known that Hong Kong 97 was made by a Japanese developer who probably never even heard of Leszek. If you look closely you can see a timestamp on the screenshot. That timestamp shows "17:31" which is a 24-hour format used in many countries; there is also a date attached. The date is 8/6/1992 which could be interpreted as either August 6 or June 8. There was a user on Social Anxiety forum who suggested the person in the Game Over screen could be Atef Bseiso, a controversial figure who was assassinated in June 8 1992. Kurosawa claims this was from a VHS tape he bought at a market, and to this day doesn't know who it actually was.[3]

If Chin is hit by anything other than the invincibility item, the game is immediately over (unless Chin is under invincibility), and a gruesome image of a corpse appears as the game over screen, with the words "CHIN IS DEAD!" in English and in improper Chinese "Chén sǐ wáng" (陳死亡), which can be interpreted as either "Chin is dead", or as a proper name "Dead Chin") superimposed on the screen. Then the game goes to the credits and back to the title screen and repeats again.

Known box art of the game. 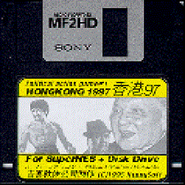 A floppy disk of the game. 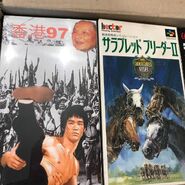 Possible alternate cover, found by @lastgamerjop on Instagram.[4]
Add a photo to this gallery

Retrieved from "https://bootleggames.fandom.com/wiki/Hong_Kong_97?oldid=37548"
Community content is available under CC-BY-SA unless otherwise noted.