This article is a stub. You can help BootlegGames Wiki by expanding it.
All the following games were devloped by Hwang Shinwei during 1990 and 1991 and solely featured on some of the multicarts released by RCM Group.

Face Tetris is a puzzle stacking game similar to Hatris. The player has to stack three consecutives pieces composing a full face to clear the pieces off. Upon recomposing a certain number of faces, the playfield may be cleared off slightly of the unusable pieces.

Guess Number is a simple guessing game. The player has to guess a four digit number using two hints returned by the game, the number of matching integer and the number of properly positionned integer.

Jewelry is a Frogger clone in which the player controls something that looks like a larva. The game has garbled graphics in the Golden Game multicarts.

Picture Collect is a simple sliding puzzle game. The player has to match the arrangement given in the right hand side of the picture.

Sky Shot is a simple shoot'em up. The player is facing static blocks that must be shot at to remove them out of the way before they touch the bottom of the screen, kind of like Quarth. Failure to do so results in a game over.

X1 Race is a straight line car obstacle course. The player has to avoid other cars dispersed randomly and advancing at various speed on the different lanes and reach the end as fast as possible. Hitting another car slows down a lot the player's car.

Cartridge Story was a line of multicarts released by RCM Group in 1990. There exists three different cartridges each with different game counts. 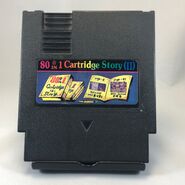 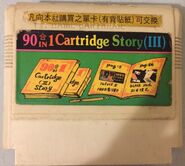 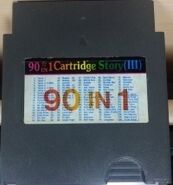 This series of multicart got much more popular than the Cartridge Story one, notably in Taiwan and Canada. Other publishers eventually copied it and added games like Contra, that would be playable upon reseting the cartridge. However, it lacks some of the exclusive games found on the second and third volume of the Cartridge Story cartridges, some of the games also have some graphical issues. 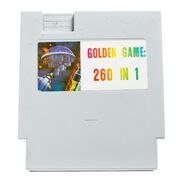 260-in-1 - Alternate front cover
Add a photo to this gallery
Retrieved from "https://bootleggames.fandom.com/wiki/Hwang_Shinwei_Minigames?oldid=40425"
Community content is available under CC-BY-SA unless otherwise noted.