Iraq War 2003 is a pirated game made for the Sega Mega Drive by Tomsoft in 2003, based off the Iraq War.

(Quoted from the game, including typos)

"2003, The USA & the U.K. Army invaded Iraq and pled Iraq made and hold cosmically BNC weapons. Under the cloak of cosmically air attack, the land forces of the united Army pushed forward to the Baghdad. The Tigris where gestated the venerable civilization, became the focus of both sides contest. Your duty is stops the united army and guard the Tigris."

This game is a simple shooter game similar to Beach Head 2000, in which played in a first-person view where the player is fixed to one spot which makes it impossible to avoid attacks. They can aim anywhere on the screen and the screen itself scrolls when the cursor is near the edge of it, with the player being able to turn a full 360 degrees. You are armed with what appears to be a gun turret and RPG (rocket propelled grenade) which can be swapped by pressing the B button. All of the bullets fired will kill the enemy instantly if it hits them. However, the poor hit detection makes it somewhat difficult to aim properly as soldiers that are far away have to be shot below where they're standing. There are three different types of enemies; soldiers, soldiers that parachute into the level and helicopters. The former two have to be killed with the gun turret while the latter have to be destroyed with the RPG. The player has three different meters measuring how much ammo you have (for the gun turret,) armor (displayed as "SHIELD") and enemies remaining. If the shield runs out you lose a life, and clearing all of the enemies sends the player to the next level with a password and the message "Mission successed!" (sic) There is also a counter telling the player how many rockets they have left for the RPG. Sometimes crates appear that give the player extra ammo, armor or rockets. There are 45 levels in total.

The graphics appear to be mostly original, and the animation is somewhat choppy, much like Dragon Co.'s Famicom titles. The backgrounds, however, are most likely digitised from a photograph. There are also photos of George Bush, Tony Blair and Saddam Hussein put into the game as well. There is no music in the game, although one of the sound effects (which plays on the title screen) is taken from Microsoft PowerPoint. Another sound effect was taken from Ninja Clowns. 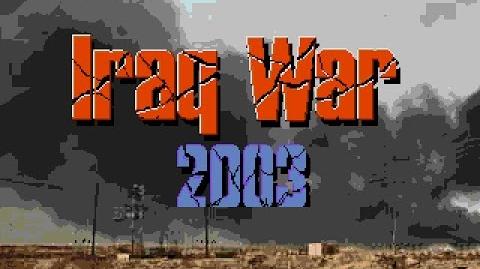