This multicart is somewhat notable for containing the only known complete version of the Super Mario World NES pirate as well as Aladdin games and its hack, Popeye II: Travels in Persia. However, the majority of games are first-generation Famicom titles, many of which are known to be included on many other multicarts. The last four games are hacks of other games on the cart, one being a hack of PAC-LAND which alters the control scheme to make it like a standard Nintendo game.

Oddly, only 2 of the games on this multicart are 24kb in size (Bomber Man and Front Line). As well as this, many games have their copyright replaced with a year from 1995-97. The board itself states that production started during late December 1997. There is a DIP switch in the cart which can expand the list of games to 90, but the extra 45 games listed are just repeats.

Brackets are used for real game titles and/or extra information. 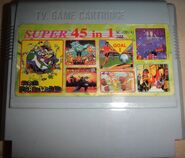 Retrieved from "https://bootleggames.fandom.com/wiki/JY-120_(A)_1998_Super_45-in-1_Multicart?oldid=39330"
Community content is available under CC-BY-SA unless otherwise noted.