Jing Ke Xin Zhuan (荊軻新傳) is a Chinese-language Famicom RPG developed by Hummer Team and published by Supertone Electronics. According to Hummer Cheng, this was the first Hummer Team game, and it appears to be their only RPG, as well as the only game published by Supertone. This game is based on a historical figure known as Jing Ke who attempted to assassinate Qin Shi Huang, China's first unifier emperor.

Despite this game being centered around Jing Ke, you start off playing as Crown Prince Dan who was the prince of the State of Yan and was given as a hostage to Qin Shi Huang by his father to prevent war with Yan. You're unable to leave town since the guards have closed the gate so in order to escape, you need to grab a placenta from a jar in one of the houses and talk to a man inside Qin Shi Huang's castle in order to learn a skill that allows you to imitate a rooster's crow. Once you use the placenta, you can leave the town and you're unable to reenter. You must find Minister Ju Wu in Ji, the capital of Yan. You then play as Ju Wu (while retaining the same stats, items and equips) to find Tian Guang to search for a possible assassin. You then switch to Tian Guang in order to find Jing Ke and as Jing Ke, you report back to Prince Dan and begin preparing the assassination. Some of these preparations include finding Huan Yi and get a hold of his head, obtaining a dagger tipped with poison and finding Qin Wuyang for assistance. While the game does follow the original history closely, it's exaggerated in several other areas such as the enemies you fight being various creatures or requiring you to travel through dungeons to acquire certain items. The only boss you ever fight in the game is Qin Shi Huang himself. It's also notable that you can in fact assassinate Qin Shi Huang successfully; the original assassination attempt actually failed and resulted in Jing Ke getting killed. (Hence the "New Biography" (新傳) in the title)

This game features some unique and possibly unusual mechanics for a turn-based RPG. Similarly to the NES Dragon Quest games, pressing A opens a menu that allows you to talk to an NPC, investigate what's in front of you, check your stats or use any items or "martial arts". While there is a 16x16 Chinese font used for menus and the battle system's text boxes, unlike other Chinese RPGs the dialogue (as well as the text displayed when you use a spell/item) uses really large characters that scroll from right to left. In-battle, you have your standard commands such as attacking the opponent, using a martial art (instead of magic or spells like in common RPGs), using items, viewing your stats and running away from the battle. There's also a command that's similar to the attack command but the game chooses for you which foe to attack. One unusual mechanic is that only one person in your party and only one random foe will attack; if you have acquired Qin Wuyang, you either have to choose between him or Jing Ke to preform a specific action. Another mechanic not seen in other turn-based RPGs is the fact only attacking or running away uses up a turn; you can use as many items you can in one turn and use "Dan Tian Gong" (the healing martial art) as many times as you wish, making it possible to fully heal yourself up before you attack. You're also able to switch equipment in the middle of a fight as well.

A recent mainland Chinese re-release, probably a pirate. The cart is similar to the type used by Waixing for their later releases, with the Waixing logo removed.

Another mainland release, this time in a similar type of cart to that used by Nanjing, again without their logo.

Box, presumably from the previous cart. 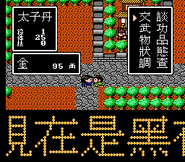 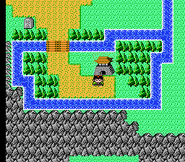 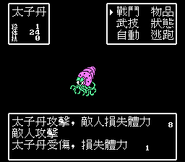 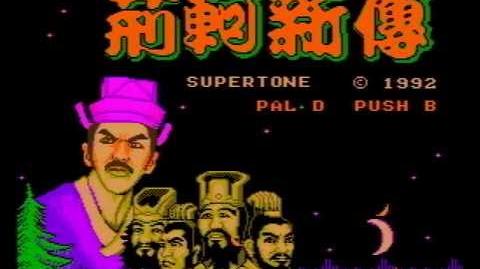