Jue Zhan San Guo (決戰三國) is an unlicensed Chinese-language game for the Game Boy Advance, released in 2003. No English translation is known to exist.

The overall plot is based on the Chinese historical fiction novel Romance of the Three Kingdoms, with Liu Bei (ruler of Shu) as the main protagonist and Cao Cao (ruler of Wei) as the main antagonist.

Jue Zhan San Guo is a tactical role-playing game in which the characters move around a field and attack each other. Occasionally, a character will automatically counterattack upon being hit. Every character has HP as well as EP. HP is health which, if brought to zero, causes the affected character to disappear. EP is a separate energy meter for special elemental-based attacks. Liu Bei's defeat always results in an instant "Game Over" even if the player's other characters are still usable. Gaining enough experience points allows one to level up, and each character must be strengthened individually. Items can be bought before each battle; some restore either EP or HP, some revive vanished characters and some may poison, paralyze or even tranquilize the victim. Teams are color-coded; the player's characters wear green and blue, while the artificial intelligence's characters wear red, orange and yellow.

There are several types of fighters:

The game shows signs of being developed by Vast Fame, the most prominent being the sound engine, which appears to be a combination of the sound engines used in Rockman & Crystal, Mo Jie Qi Bing and Digimon Ruby. 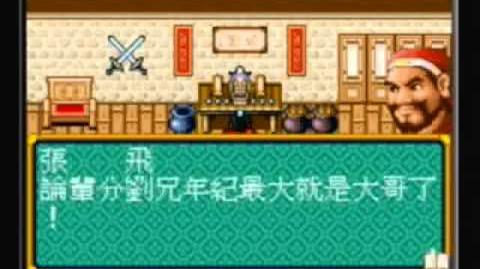