Jurassic Boy 2, known as Chao Yin Su Xun Meng Long (超音速迅猛龍, literally Supersonic Raptor) in Chinese, is a clone of Sonic the Hedgehog made and released by Sachen. It was released on the Famicom and Game Boy Color.

The story is delved into deeper in the character descriptions (again, original English left in). For Crachi:

The graphics are somewhat original and mainly inspired by Sonic the Hedgehog, with the environments being loosely based on those from that game. The color of Chen is inconsistent in the Famicom version, being pink on the title screen and in the ending cutscene and reddish-orange during gameplay. In the Game Boy Color version, he's always pink. 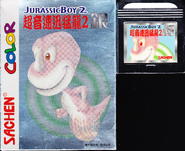 Cartridge and box of the Taiwanese Game Boy release. The metallic silver cartridge is exclusive to this game and particular (Taiwanese) release.