Juro was a publisher of Famicom and Game Boy cartridges that was active throughout the 90s. They released various multicarts for the Famicom, usually with ID codes that had a CH prefix and Game Boy multicarts with a JR prefix. They also released single Famicom cartridges complete with boxes and manuals.

Box of one of their Game Boy multicart. Photo courtesy of blipretro.com 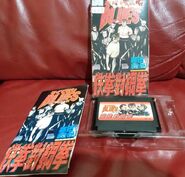 Rokudenashi Blues release.
Add a photo to this gallery
Retrieved from "https://bootleggames.fandom.com/wiki/Juro?oldid=43428"
Community content is available under CC-BY-SA unless otherwise noted.