Kart Fighter (瑪莉快打) is a fighting game for the Famicom developed by Hummer Team. The game was possibly made in early 1994 because AV Bishoujo Senshi Girl Fighting reuses assets from Kart Fighter. It's well known due to having characters from Super Mario Kart beating each other up, Street Fighter II style.

Kart Fighter uses the Street Fighter II engine, albeit slightly altered. Everyone's movesets are pretty similar overall. Every character, except Nokonoko, can throw a projectile. Also, some characters have charge attacks and some have stationary attacks. A handful of the background graphics seem to have been taken from Little Nemo: The Dream Master, Mario & Wario, and, obviously, Super Mario Kart. The music mostly consists of prior Hummer Team songs, but the songs from Peach's stage, the title screen, and the ending theme are all remixed from Super Mario Kart.

Kart Fighter has five difficulty levels to choose from, like in most of the games based on this engine. The AI, however, seems to have a predefined pattern on the second round no matter which difficulty level is selected (ex: ducking will cause them to shoot a projectile if they have one, jumping leads to either a charge move or an uppercut, etc.) Kart Fighter also has a versus mode; to join, push the d-pad on a second controller.

There are a total of 8 playable characters in Kart Fighter. The character's names in-game are in parentheses.

Since Kart Fighter is an unlicensed game, it doesn't have feedback from any commercial gaming magazines. However, with the ROM being available to the public, there are plenty of user reviews on GameFAQs, YouTube, and several independent review sites.

Going through Kart Fighter's tiles, one can find some that spell out "Game Over". These were left unused. This suggests Kart Fighter was planned to have a Game Over screen, but it was scrapped. The tiles are very similar to the ones used in Sonic the Hedgehog (Genesis)'s Game Over screen. 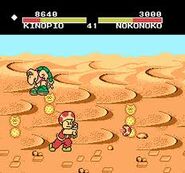 Re-release by an unknown company in Argentina in the early 2000s.

Another pirated copy made after 2009, found in Perú.

A pirated copy made in 2020 by a Chinese producer.

The top 8 score screen at the end of the game.

Kart Fighter running on the 369-in-1 GBA multicart. 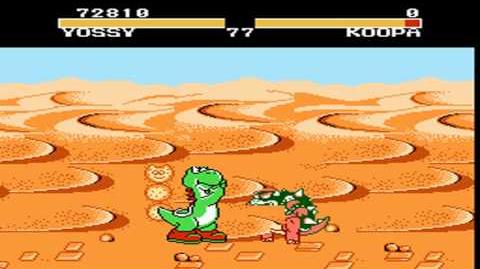