Start a Wiki
Kou Dai Bao Shi: Yin, also known as Pokémon Silver, is a bootleg port of Pokémon Ruby and Sapphire for the Famicom made by Shenzhen Nanjing.

The game's a re-release of one of SNT's first two games, which were properly labeled as Ruby/Sapphire. They feature minimal differences from this game like a new title screen, the player's back sprite, and the "trainer" used for wild Pokemon (who in turn is used in place of the legendary cover Pokemon, in this game's case Salamence replacing Groudon.)

The gameplay itself features very basic game mechanics. There's only two types of attacks in the game: one which freezes the opponent for a turn along with minimal damage, and another that's a stronger regular attack (the freezing attack can only stun the opponent once if used repeatedly, while the opponent can use it several times in a row and freeze the player each time.) Damage calculation is also very primitive; aside from the move's strength (which there's only about three or four levels of) it is otherwise calculated by the level difference between the two Pokemon, since typing, stats and critical hits don't exist in this game. Evolution also doesn't exist, so your starter will stay the same the entire game and you can find evolved Pokemon out in the wild.

It features many inaccuracies as compared to the original game. For instance, the introduction replaces Professor Birch with Professor Elm, Marril replaces Azurrill and you can find wild Pokémon in Littleroot Town. As for the soundtrack, it only features two songs in the entire game, both being different 8-bit renditions of Oh Susanna.

The Pokemon that can be found in this game aren't the full Gen. 3 roster, and oddly use some that can only be obtained by trading with a later released game (such as Metapod and Forretress.) Many of them have either an incorrect color palette, badly edited/custom sprites taken from other Pokemon or of the front sprites, or in the case of Hoothoot, a glitched sprite.

On top of this, unlike some other Pokémon bootlegs, not every Pokémon can be obtained in this game. One such example is Duskull, who is only seen in an Elite Four battle. 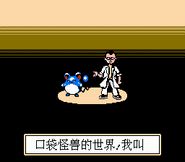 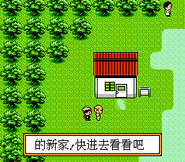 Retrieved from "https://bootleggames.fandom.com/wiki/Kou_Dai_Bao_Shi:_Yin?oldid=40334"
Community content is available under CC-BY-SA unless otherwise noted.