Krazy Kreatures is a puzzle game for the NES, developed by Bitmasters and published by American Video Entertainment.

Krazy Kreatures is an action strategy game for one or two players. The player play as an intergalactic immigration officer, transporting creatures from your deck to their destination with their own kind. Critters of all sorts will fill up the game board and the player need to move them around to line up creatures of the same type before the entire board becomes filled. Depending on the type of creature, the player will need to line up 3, 4, 5, or 6 of the same type of creature for them to disappear. After the player have cleared a certain number of creatures, the board will stop filling up and the player have a limited amount of time to try to clear as many creatures as possible for bonus points. As the levels progress the game board changes shape and will fill up faster and faster with different creatures. 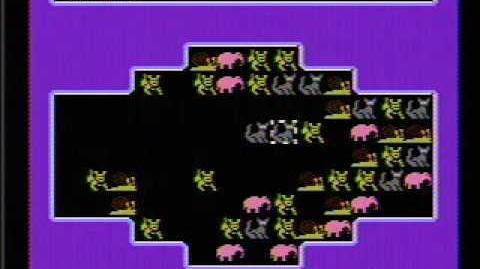