Lines is an unlicensed Russian port of an IBM match-five game called Color Lines for the Dendy.

The title screen features a jester juggling 3 red, blue, and yellow balls, as well at the word "Lines" on the top of the screen. At the right side of the jester is Russian text that reads, "ОДНА ИЗ САМЫХ ПОПУЛЯРНЫХ ИГР ДЛЯ IBM PC ТЕПЕРЬ ЕСТЬ И У ВАС!". The title music appears to be a very poor rendition of Ode to Joy. In the background, random balls of random colors zoom in and out at random places of the screen.

When the game begins, you are given a 9x9 grid that contains three randomly placed balls with different colors. Each turn, you move a single ball at a time by selecting a ball and then choosing a blank space. If you make a vertical/horizontal line of five balls of the same color, they vanish and the player is awarded with ten points. After each turn, three balls of different colors appear randomly on the board.

If the board becomes too full, a large "Конец" (Game Over) word appears over the board with a black background. 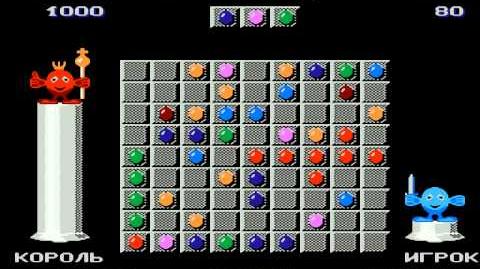 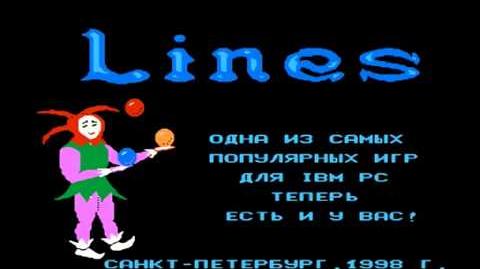 Worst Video Game Music Ever Lines (NES)
The title theme, a very poor rendition of Ode to Joy.
Add a photo to this gallery
Retrieved from "https://bootleggames.fandom.com/wiki/Lines?oldid=48417"
Community content is available under CC-BY-SA unless otherwise noted.