Lu Ye Xian Zong (also called 綠野仙踪 or "Wizard of Oz" in Chinese and God Gives Directions on the manual's cover) is a Famicom pirate made by Waixing in 1996 (under their ESC Co. alias) based on The Wizard of Oz. The plot follows that of the 1939 movie, although the game is in Chinese as opposed to English.

The game is a fairly standard platformer in which the player has to guide the characters from the film (Dorothy is the only playable character at the start, while others appear later on) with each having their own abilities.

In the first level, you can skateboard across much of the level, followed by another area where you have to jump your way to the end of the level where The Scarecrow can be found. The Tin Man and Cowardly Lion can be found in the later levels. The player only gets one life for each character and there are no continues. Dorothy has a spread shot similar to that of the spread gun in Contra.

Many of the graphics are ripped from numerous other games. The title screen bears a strong resemblance to Castle of Dragon's intro. Barza from Kyoryu Sentai Zyuranger is used in the cutscenes, the "To Green Castle" signs are taken from Mickey Mousecapade, the "Good luck!" message in the opening story being taken from Crossfire, the windows in the first level are likely re-edits of those from Hummer Team's Aladdin pirate, and Willy from Rockin' Kats shows up several times in the ending sequence.

As well as this, the mushroom enemy is taken from Don Doko Don 2 and the small one-eyed green blobs that the frog spits at you are the aliens from one of the bosses in Chip 'n Dale Rescue Rangers for NES, while one more enemy is from Little Samson. A few enemies are taken from Panic Restaurant, such as the jumping sausage (re-colored to green). The last boss is copied from Chip 'n Dale Rescue Rangers 2 being re-drawn in other colors and with new attacks.

The music is original, but the sound engine is stolen from Konami. Many of the sound effects also come from Konami games, most notably the death sound being the same as the one in Contra. 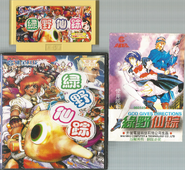 Scan of a complete reprint copy.