Mafia (Мафия) is a Russian Mega Drive hack of Dick Tracy. Since the title screen image is taken from Mafia 2, it was probably made to coincide with the release of that game. 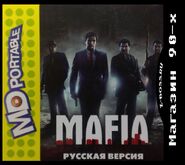 Front cover for the portable edition.

Front cover and the back.

The original image from the title screen.
Add a photo to this gallery
Retrieved from "https://bootleggames.fandom.com/wiki/Mafia?oldid=48258"
Community content is available under CC-BY-SA unless otherwise noted.